skip to main | skip to sidebar

I've had three days of putting this with that, combining all my bits and pieces to try and come up with a stand that is going to both look good and be strong enough to hold a framed monitor.

I've been looking at a lot of the steampunked versions on the internet and found myself wanting to copy them but most of them have attached the stand to the sides of the monitor and I really liked the idea of having a single stem stand. It occurred to me at a slightly hysterical and tired 5am this morning, that THEY haven't copied anyone - they've been making it up as they've gone along so there's no reason why I can't as well.

That is, after all the whole idea.

So after sleeping on it and digging through what I already had in the shed, I took a 'quick' trip to Mitre 10 with my mate and handyman extraordinaire, Aaron, and this is what I ended up with to construct my monitor stand. Yes, this is the makings of a monitor stand. 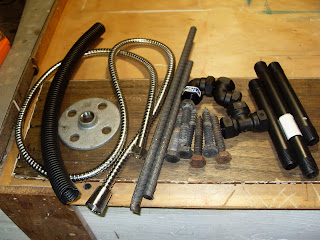 We've got some irrigation pipes and fittings, a couple of pieces of steel rod, cut to size, 6 massive coach screws, a galvanised face plate thingy, some plastic hose, the hose off a shower head and the front of a drawer from an old cupboard I found ages ago in hard rubbish.

Today I'm putting together the stem and arms of the stand. 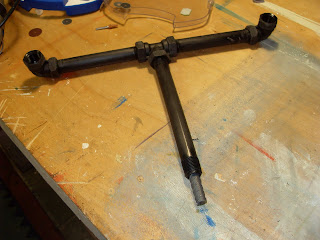 Assemble the 'T'. I've placed the metal rods inside the tubes of the T. No more worries about the thing bending under the weight - I reckon I could play George of the Jungle on that.

*When she was little, my daughter thought she'd play George of the Jungle in the bath. An emergency trip to the doctor and 4 stitches in the back of her head later...needless to say she's never tried to swing on a shower curtain again :-)* 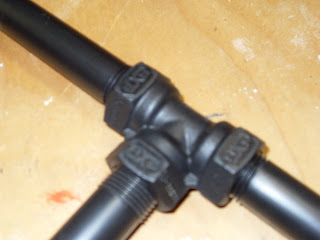 Lots of manufacturers markings that I don't want so I grab my new best friend, Dremel, and grind them off, adding a few nicks and scratches for good measure - it's supposed to look old industrial so marks are good. 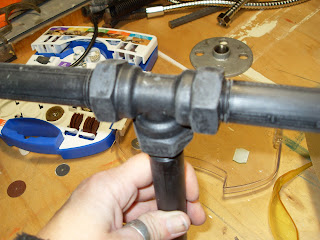 Ready for painting! The paint I'm using is a wax paint called Rub'n'Buff. Amazing stuff - you don't need to prime, just rub the paint on with a soft cloth, wait a couple minutes and buff the excess off. I love it. I haven't tried real hard to get into the nooks and crannies so there's a bit of the original black piping showing through as lowlights. 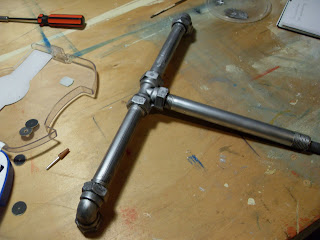 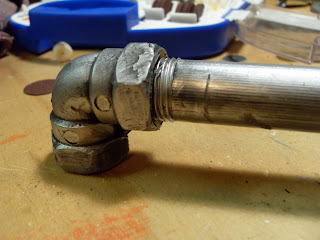 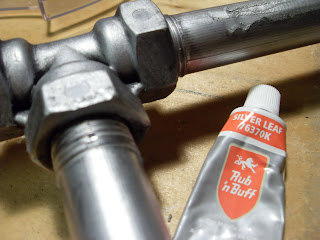 This is the stuff - I got it at my local art supplier here in Adelaide. It's around $10 a small tube but it has amazing coverage and one tube seems to last forever.

Kat
I'm an 'arts and crafts enthusiast', parttime crystal woo-woo consultant, I own my own gallery and have three kids, a techwizzy boyfriend and a dog. My life is gloriously eclectic, mindbogglingly hectic and always, always entertaining. To me, anyway. After suffering from ACS for many years, I've decided to put my money where my mouth is, so to speak, and begin to truly live the dream. And document it.